The sound lantern that never was

The bells are not audible over much of the Parish. That is hardly desirable, so how did that come about? When the tower was built, no one envisaged modern conditions. The tower had very large openings right next to the bells, which would have let out a lot of sound – enough to carry across the tiny town, and also across the open fields to peasants in the outlying farms and cottages. But the sound would have been pretty deafening next to the church, something that modern residents would not tolerate. Many years ago, our predecessors largely bricked up the openings on the North, West and South sides of the tower to reduce the intensity of the sound. That made it less intrusive close by, though we still received irate complaints from some local residents in the late 1970s. Keen to be a good neighbour, in 1982, we installed openable shutters  on all four openings. That meant we could more or less 'switch off' the sound of practices, etc, and just open the shutters for public ringing. The shutters were designed to have a similar area to what it was open above the earlier bricking up (on the S, W & N sides), so when they are open, the sound level is similar to what it was before on those sides, but somewhat less on the E side, which had been only partly bricked up before. And it was still much less than it would have been centuries ago when the tower was built.

Wokingham changed as well. It is covered with houses, and bathed in traffic noise. Both factors reduce the audibility of the bells farther away from the tower.

To find out the extent of the problem, in 2002 someone cycled round the town during Sunday morning ringing noting where the bells were and weren't audible, and a follow up article in the Parish Magazine  asked people to say whether they could hear the bells.

The map (approx 1.9 miles x 1.3 miles) shows the results. Green dots = audible and red squares = not audible. On that basis, the audibility is roughly inside the grey dotted line, though it varies with gaps between buildings and the level of traffic noise. For example, the isolated green dot well to the north (reported by a resident) suggests favourable conditions at that spot. 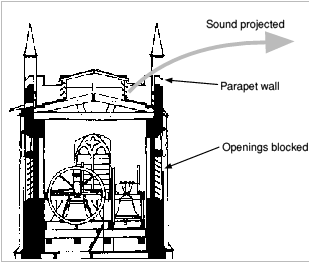 There is a way to provide long range audibility of bells without deafening those close to the church. With a sound lantern, the tower has no openings on the side, but it has a structure on top of the tower with large openings to let the sound out. The large openings help long range audibility, but with the sound lantern set back from the edge of the roof, the parapet wall creates a 'sound shadow' in the area close to the church, which greatly reduces the sound. If a new bell tower were designed today, it would almost certainly have a sound lantern rather than openings in the traditional place. Unfortunately, they hadn't thought of that when the tower was built around 1450.

To help decide whether installing a sound lantern could make an improvement at All Saints, we tried to find others that could be observed in action, ie see how far away from the tower the bells could be heard. We found that there were very few, and we only visited three. Easton Neston had normal open side louvres, so there was no point in returning when the bells were ringing. St Nicholas Guildford had the side louvres boarded up, but when walking near the church it was clear that sound was coming through them. In any case, walking away from the church along the towpath, the urban background noise soon masked the sound of the bells. Isleworth was the only tower at which we could do a reasonable test. Close to the tower, the bells were fairly quiet, and as one walked further away the sound level increased a bit before declining. But the distance at which they became inaudible was not much different from the distance in Wokingham.

Why the idea wasn't pursued

With some reluctance, we dropped the idea of installing a sound lantern: